SteelForce .177 Caliber Steel BB Airgun Simply a dream!!! Where have you been all my life... and why did you leave so soon...

***UPDATE: The gun died. Just slowly died. First I needed to pull the charging handle back when switching from safe-semi, and from semi-6 round burst modes. Then it was after every burst, or every few semi shots. Finally it stopped firing all together. This seems to be a common problem. I haven't even had the gun for 90 days yet. I'll be contacting Umarex tomorrow. Let's see how they handle things. Maybe they'll earn an extra star for their responsiveness...

I've only just gotten back into the wonderful hobby of BB shooting and God above how it's changed!! Before I could only have dreamed about a gun like this!!

After 14 years in the Army I had grown quite accomplished at firing my M16 A1 and later the A2 and I missed it very much. So when I saw this gun I couldn't stop myself. I purchased mine through Red's Gear (5 stars for their service!) and the gun arrived early and in perfect condition. I read the manual and after deriving the basics set about putting some rounds downrange. The loading mechanism is simple and effective. The gun itself can hold up to 300 BBs but they begin to rattle about a bit as they diminish so I only loaded 28 at a time - two shy of the max the weapon can feed at one time. It feeds perfectly and at 6 round burst (the most amazing thing since sliced pizza) it polishes through those 30 rounds like a hot knife through butter. The only drawback to the 6 round burst is that it does eat CO2 like a ravenous dog on a porkchop but it's worth it! The first time I pulled that trigger back and felt it growl away I fell in love with this thing - a feeling NOT shared by my dog, lol.

The folding stock allows for 6 positions including fully extended and fully collapsed. I purchased a rubber butt cap for comfort which slipped on as though it were truly made for the gun.

My only criticism is a tiny one and specific to left handed shooters like myself. The rail system is set up for right handed shooters only. When I
removed the rail, on the right side of the gun, it was no more than plain plastic beneath. It would have been awesome if there were some details beneath so that I could have maintained the guns incredible look without that rail. Still, easy enough to make due.

I recommend this gun to anyone interested in a solid, albeit plastic, rifle.

One tip: I took a little flat black model paint and painted the mechanism used to secure the CO2 cartridges. You can BARELY notice them now. 5 second fix that adds significant realism to the gun.

I've included a picture of my first run through. 150 BBs fired on 6 round burst, and a picture of the underside of the magazine where I painted the CO2 cylinder locking mechanism. 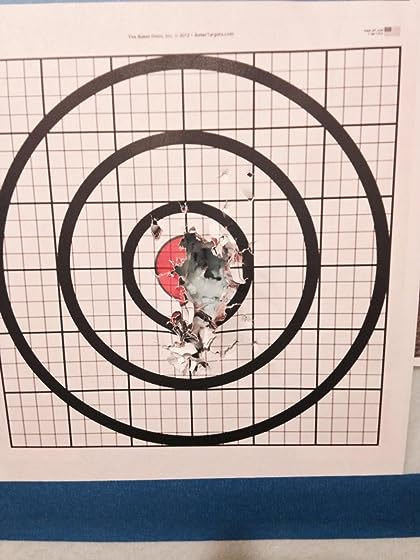 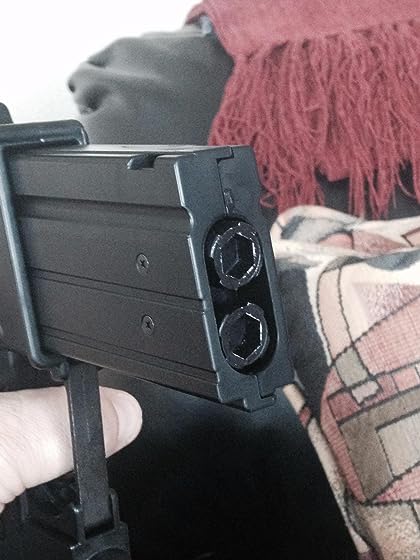